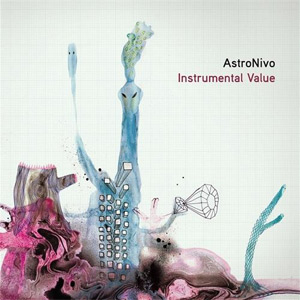 Fresh and new! In the name of Tribal Vision records as usually. AstroNivo, progressive trechno trance duo that present them self in previous Tribal vision releases and one of them, that will stay remembered, is for shore JAIA remix album where those guys show us from what they made. New album by the name "Instrumental Value" with full lenght release of 10 extraordinary tracks is in front of me as cover shape and inside of my CD player as music shape.

As the first track say "On the Start" and I can say very well start for this neverending story. Reapetative motives of minimal sound but still enough lines to describe this huge masterpiece as very danceble music for home treat as on the dance floor. Disco elements and pumping grooves talk about much more then we need. Just shut up and dance. Sometimes as agressive aproach but sometime as peaceful flow, AstroNivo like to lead us in, just on fist sight old dimension, but in complete meaning of totally new leavel with jumping groove of their music. Massive bell effects and lot of congos, percussion and breaking sticks rhythms, totally match as the name of label, tribal expirience for whole new vision. Deep fat basslines, as pad floating lines or gate effect of expression, this songs makes me wanna dance in right way of that words. Splashing sound, spray parts and histerical cartoon bars are enough for me to find this release very interesting and worth to be reviewd by my self. Pretty damme good combination of everything. Dark or light, sad or happy, mad or smiley, here we have everything in every moment in the same time and without loseing sense of composition in arrangement. Brave and smart from those two heads that create this debute album, if i'm right about debute thing? Becide of that this release perfectlly fit in Tribal Vision style and I think that will perfectlly fit in many CD cases of lot of minimal-prog-techno DJs. This kind of style take more and more and I can say that this one is the bulls eye on electronic music scene.

Guy and Niv, congratulation guys and keep those dreadlocks on the knobs during the performance.
To Slater and the crew, please, try to disapoint me just one time cause I miss space at my CD shelf!

Time of Goa trance music slowly returned from the forgotten sound of outdated music. As for me, termin "outdated music" does not exist but lately we can hear it very often. Of course, developing of mention style is not near of early conception but its in very good level. One of artists that keeps Goa Trance alive is well known producer from Greece, mister Dimitrios Pouranis from Omegahertz project and owner of trance label ELXIS DiscoGraphic.

The topic of my today's review is the debut music album of Omegahertz project under the name "Anamorfoplasis", which came out for the above mentioned label. Admirers of his sound, before everything, remember the extraordinary piece that was released for also Greek label, Unicorn Music, in colaboration with serbian Goasia project on collab album "Pure Planet vol. 2 and a series of compilations that occurred prior to this realization. Trust that he earned with earlier work justified with this release which is carefully arranged. Up to 12 tracks presented in collaboration with many friends and colleagues.

Carefully observing CD cover, I came to the conclusion that in creation of this album participated truly impressive number of people. Bunch of the track are vocal characters, which can be classified into a kind of innovation Goa Trance sound. Regardless of that I'm absolutely not into such a combination, anyway that dosen't mean I'm not support any kind of expression that the artist wants to show. Although that bassline is newer date, rest of elements breathed spirit of old School trance to this tracks. By the way a new approach to bassline and the track arrangement is a great trick to approximate the old sound of the new generations. Some poeple would say that it is one kind of fullon sound, but certainly that would not be completely true, because in this style, mentioned bassline runs through totally softer touch of the fullon and still gives the energy of the rhythm. Once again, no matter on filters that are consistent with the arrangement today's psychedelic dance music, melodious justifies name of stily that the project preferred. I would mention a moment of combining various ethnic instruments like flutes, timpans, bells, tambourines and other strings. Very interesting combination and I believe that would also reflect on the audience during live performance. Of course, we can not avoiding inevitable acid lines modulated at TB303 and similar synthesizers. A very interesting item at this project is, even after album listening, could easily conclude that the artist approached the whole story with a huge dose of enthusiasm. My personal favorite is the track on position 4 under the name "Walking On The Other Side".

Regards to Dimitrios and all the best in future