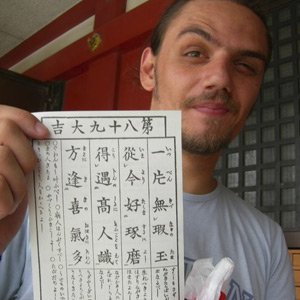 This is about Kanc Cover, a DJ & producer from Serbia. He started amateurish with music production in 1995. First formed project was X-Raything. In 1997, he started with first releases for radio show "Fractal" Technokratia (Sound Galaxy).

In 2002/03 Kanc released two demos with ambient sound, under the names "SloWaves" & "Nature Forme" and year after he released many ambient singles. Serious work on parties, Kanc acquires in the year 2000. First biggest performance was in 2004 on big club festival "Transplant" under the organization Technokratia and "Organica 2005" New Year festival under the production by Organic Landscape community.

After he joined the Goasia project, he played on international festival "EXIT" episode 5 in Novi Sad, Serbia. After that performance and headstrong managing of "SoundMute" artists’ community headchief, Lara Krumpl, Kanc continues with performing in former Yugoslavian republic (Macedonia, Slovenia, Croatia...). In the beginning of 2006, he signed for ambiental record label Cosmicleaf, and during the 2006, under the influence of variability in electronic music, he founded his night-tech-progress project "Orbital Psy" also known as "OPSY". 2007 brings him a world tour, where he presented his new work and long time experience. He performed all over the globe. Some of the most important performance is achieved at events such as JZ Trance crew events in Tokyo in clubs like "Ageha", two times in Box stage and one in 2011 in Arena main stage, club "Cube 326", interesting performance with DJ set in Quintrix CD shop at Shibuya and open air events at IZU island and Namesawa party camp. Club "B1 Maximum" in Moscow with Positivemakers. Huge festivals like Aurora, Antaris Project, Universo Paralello, Transylvania Calling, Samsara, Freedom Power vol.3 and 4, Misterika festival, etc...

In a last two years he released 3 great ambient DJ sets on DI.FM and Fluid Audio with jingle support of Charles Farewell aka Asura, Daniel Segerstad from Carbon Based Lifeforms and Magnus Birgersson aka Solar Fields and 2 techno trance DJ sets on Ravevox with Ariel Electron from X-Dream and Prime Suspect.
Probably the most interesting single that Kanc made is actually ambient rework on Man With No Name's trance hit "Sugar Rush" with the Martin Freeland's "blessing". Beside that, Kanc work on tracks with many more artists, and from ambient names that was Koan, Side Liner, Zero Cult, Magnetik, and some of then will stay undercover until he publish all upcoming material.

Somewhere in the middle of 2008 he runs with his manager and wife, Lara Krumpl, an electronic music label based on techno trance and downtempo music, called Soundmute Recordings.

At the moment he is working on Opsy first album and Rezolut techno project with his friend and partner Miroslav Bako from Man Machine and Excizen.
You can expect an ambient album and releases from Kanc Cover very soon. There is enough material that wait for publishing. Also a bunch of new recorded DJ sets from a lot of different electronic music styles in which you can try to find yourself.